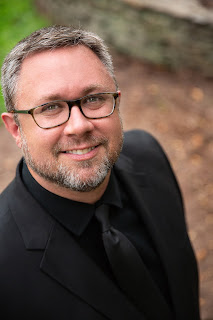 Richard Waters is Director of Choral Activities, Voice Area Coordinator, and Professor of Music at Eastern Kentucky University, where he directs University Singers (SATB) and Koros (TTBB), teaches courses in conducting and choral literature, and oversees the graduate choral conducting program. Choirs under his direction have been invited to perform at the ACDA Southern Division Conference (Memphis, 2010), the Kentucky Music Educators Association state conference (2016, 2021, 2022), and the Mississippi ACDA/MMEA state conference (2007, 2011). His choirs have performed in many notable national and international venues, including Carnegie Hall, Washington National Cathedral, the Basilica of the National Shrine of the Immaculate Conception, York Minster, Salzburg Cathedral, and have toured throughout England, Austria, the Czech Republic, and Ireland. He was voted College/University Teacher of the Year for KMEA District 11 in 2012 and 2016, and received Distinguished Educational Leadership Awards from the EKU Student Government Association in 2016 and 2017. From 2003-2011, he was Director of Choral Activities at Delta State University in Cleveland, Mississippi, where he received the 2008 DSU Foundation Prize for Excellence in Teaching.

Dr. Waters maintains an active schedule as a composer, clinician, and adjudicator. His compositions are published by Colla Voce Music, Hinshaw Music, MusicSpoke, and St. James Music Press, and have been performed at numerous conferences, festivals, and honor choirs. He has served ACDA as R&S Chair for College/University Choirs and President-Elect of Mississippi ACDA, Poster Session Coordinator for three national conferences, and most recently as the Southern Division R&R Chair for College/University Choirs.

In addition to his university responsibilities, Dr. Waters also conducts the annual Stephen Foster Summer Music Camp High School Choir and is the Chancel Choir Director at First Christian Church in Richmond, Kentucky. A lifelong church musician, he has previously served Catholic, Episcopal, Methodist, and Presbyterian churches in Connecticut, Mississippi, North Carolina, and Virginia. He has served as Conductor of the Madison Singers (Richmond, KY), Artistic Director of The Mississippi Chorus, Assistant Conductor of the Choral Society of Greensboro, conductor of the UNCG Men’s Glee Club, and taught high school and middle school choir in the Virginia public schools. While in Hartford, he sang in CONCORA (Connecticut Choral Artists), the region’s first all-professional choir. A native of Richmond, Virginia, he began singing as a treble in the All Saints Choir of Men and Boys.
Dr. Waters received the Bachelor of Music degree in music education from James Madison University, the Master of Music degree in choral conducting from the Hartt School of Music, and the Doctor of Musical Arts degree in choral conducting from the University of North Carolina at Greensboro. He has studied conducting with William Carroll, Richard Coffey, David Watkins, Michael Yachanin, and Welborn Young, and has conducted in master classes led by Rodney Eichenberger, Dennis Keene, and Doreen Rao. He holds memberships in the American Choral Directors Association, American Society of Composers, Authors and Publishers, College Music Society, National Association for Music Education, National Collegiate Choral Organization, Omicron Delta Kappa, Phi Mu Alpha Sinfonia, and Pi Kappa Lambda. For more information, visit www.richardwaters.net.

Jill Campbell holds a Ph.D. in music education from the University of Kentucky where she studied choral music teacher attitudes in regard to sex-specific adolescent vocal change.  She completed BMME in vocal music education, a minor in violin performance, an MM in choral conducting, and a Rank 1 in Music Education. Additionally, she earned the Graduate Certificate in Orff Schulwerk. Dr. Campbell has experience teaching at the elementary, middle, and collegiate levels, and has worked in church music. Dr. Campbell was a founding director of the Lexington Singers Children's Choir and conducted with them for eight seasons.

Dr. Campbell is currently the assistant director of the Kentucky Bach Choir and performs in many genres of music. She has performed as part of the UK “It’s a Grand Night for Singing” and also was recently in “Matilda the Musical” (2019) at Stage Right Acting in Lexington. Before her appointment at Eastern Kentucky University, Dr. Campbell taught at Asbury University for seven years. While at Asbury, she headed the vocal area for all types of voice lessons and conducted the broadway/musical theatre workshops and opera workshops. She also taught elementary general music methods, elementary vocal music methods, secondary choral music education methods, conducting, and voice lessons. Additionally, Dr. Campbell was pleased to direct the Asbury University Women’s Choir in an invited performance at the 2018 KMEA state music conference.

Dr. Campbell is a frequent guest adjudicator and clinician for district and all-state honor choirs. She has presented clinics and workshops in numerous states on topics of music education, church choir leadership, vocal health, performance-based assessment, dyslexia and music reading, and sight singing. Recently, she presented workshops at the 2015 International Symposium on Assessment in Music Education (ISAME-5) in Williamsburg, VA, at the 2015 ACDA Southern Division meeting in Chattanooga, TN, and at the 2015, 2016, and 2018 Kentucky Music Educators Association. She lectured in music education research in March 2017 at the national meeting of the American Choral Directors Association in Minneapolis, MN. Dr. Campbell also presented at the ISAME-6 symposium in Birmingham, England in April 2017 and at the Mountain Lake Colloquium in Pembroke, VA in May 2017. Her work was additionally presented at the February 2018 ACDA Southern Division meeting in Louisville, KY and in the April 2018 ABLE Assembly at Berklee College of Music in Boston, MA. In 2018, Dr. Campbell was awarded the Modern Band Fellowship in Higher Education through the Little Kids Rock Foundation. She presented her latest research on vocal health and wellness at the spring 2019 national meeting of ACDA in Kansas City, MO. In 2020, she had a research paper and lecture accepted for ISME 2020 in Helsinki, Finland and for the Association of Popular Music Education in Edinburgh, Scotland. The 2020 conferences were cancelled in-person due to the COVID-19 outbreak. She is the current president for the Kentucky chapter of the American Choral Directors Association.
Jill is married to Mickey and is the proud mother of Andrew and Nathan. They live in Lexington, KY with their beloved cat, Mama.